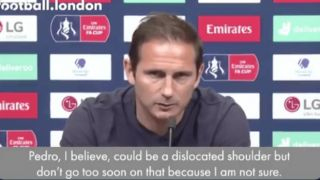 It was an FA Cup final to forget for Chelsea, and not just because they lost the game to Arsenal in what turned out to be an entertaining clash. A poor refereeing performance from Anthony Taylor saw at least two decisions go against the Blues, but it will be their injury problems that are likely to most concern Frank Lampard. Ahead of their Champions League Round of 16 second leg tie against Bayern Munich, Chelsea will be without Cesar Azpilicueta and Christian Pulisic, both of whom tore their hamstrings...